From time to time we publish Insights. Each Insights is intended to be a thought-provoking piece which often raises controversial themes or discusses misconceptions that we believe are common to many conventional economic analyses. We publish our most recent Insights here on the website.
The myth that money pumping can help economic growth

By popular thinking, the role of the central bank is to navigate the economy along the so-called path of economic stability. On this way of thinking if various shocks cause the economy to deviate from this path, then it is the role of central bank policy makers to offset these shocks. This is done by means of suitable monetary policies. In line with this way of thinking to counter the shocks from COVID19, the US central bank, the Fed pumped a massive amount of money into the economy. This is depicted by the increase in the Fed’s balance sheet from $4.2 trillion in January 2020 to $8.5 trillion by October this year – an increase of 102.7%. Because of this massive increase, our measure of money supply (AMS) climbed from $5.28 trillion in January 2020 to $9.59 trillion by October 2021 an increase of 81.6%. 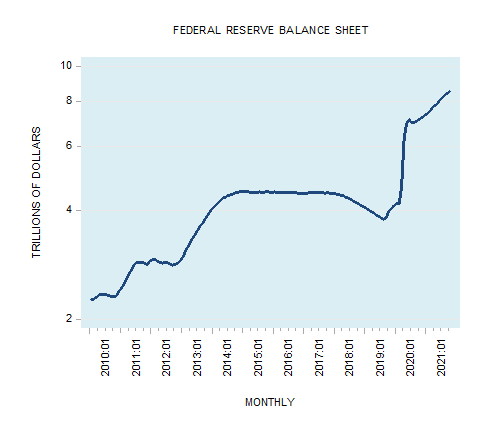 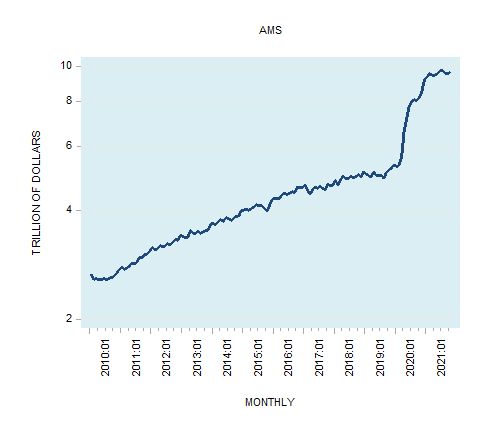 Conventional thinking would suggest that with more money in their pockets, individuals are likely to increase their spending and through the magic of the Keynesian multiplier, the rest will follow suit. On this way of thinking increases in money supply enable individuals to accommodate increases in their demand for goods and services. It is also held that in response to the increase in demand, producers are likely to oblige by lifting supply through the increase in the goods and services production. What we have here is that demand creates supply.

The role of money in all this is to facilitate trade. Money emerged as a result of the fact that barter could not support the market economy. The distinguishing characteristic of money is that it is the general medium of exchange. Money is not the means of payments it only enables one producer to exchange his produce for the produce of another producer. The means of payments are always goods and services, which pay for other goods and services.

Again, all that money does is facilitating payments - it makes the payments for goods and services possible. Thus, a baker exchanges his bread for money and then uses the money to buy fruits. The baker pays for the fruits not with money but with the bread produced. Money just allows the baker to make this payment. Also, note that the baker's production of bread gives rise to his demand for money. By demand for money, what we really mean is the demand for money's purchasing power. After all, individuals do not want a greater amount of money in their pockets but a greater purchasing power in their possession.

On this Mises wrote:

In a free market, in similarity to other goods, the price of money is determined by supply and demand. Consequently, if there is less money, its exchange value will increase. Conversely, the exchange value will fall when there is more money. Within the framework of a free market, there cannot be such thing as "too little" or "too much" money. As long as the market is allowed to clear, no shortage of money can emerge.

Consequently, once the market has chosen a particular commodity as money, the given stock of this commodity is going to be sufficient to secure the services that money provides. Hence, in a free market, the whole idea of the optimum growth rate of money is absurd. According to Mises:

As the operation of the market tends to determine the final state of money's purchasing power at a height at which the supply of and the demand for money coincide, there can never be an excess or deficiency of money. Each individual and all individuals together always enjoy fully the advantages which they can derive from indirect exchange and the use of money, no matter whether the total quantity of money is great, or small. . . . the services which money renders can be neither improved nor repaired by changing the supply of money. . . . The quantity of money available in the whole economy is always sufficient to secure for everybody all that money does and can do. (Ibid.)

Observe that the production of bread permits the baker to consume bread and fruits.  A portion of his produced bread is used for his personal consumption while the other portion is used to pay for fruits. Note that the baker’s consumption is fully backed i.e. paid by his production. Any attempt then to increase consumption without the corresponding increase in production results in an unbacked consumption, which must come at somebody else's expense.  This is precisely what monetary pumping does. It generates demand, which is not supported by any production. Once exercised, this type of demand undermines the flow of savings and in turn weakens the pool of savings. A weakening of the pool of savings undermines the formation of capital thereby stifling the economic growth.

Savings and not money key for economic growth

It is savings and not money that funds and makes possible the production of better tools and machinery. With better tools and machinery it is possible to lift the production of final goods and services - this is what economic growth is all about. Hence, contrary to the popular way of thinking, setting in motion an unbacked-by-production consumption by means of monetary pumping going to stifle and not promote economic growth.

If it had been otherwise then poverty in the world would have been eliminated a long time ago. After all everybody knows how to demand and to consume. The only reason why loose monetary policies may appear to grow the economy is because the pace of savings generation is still strong enough to absorb increases in unbacked consumption.

A weakening in the pool of savings- the heart of economic growth- exposes commercial banks’ fractional reserve lending and raises the risk of a run on banks. Consequently, to protect themselves banks curtail the generation of credit out of "thin air". Within these conditions, further monetary pumping cannot lift banks’ lending. On the contrary, more pumping weakens savings and undermines business activity, which in turn makes banks reluctant to expand lending. 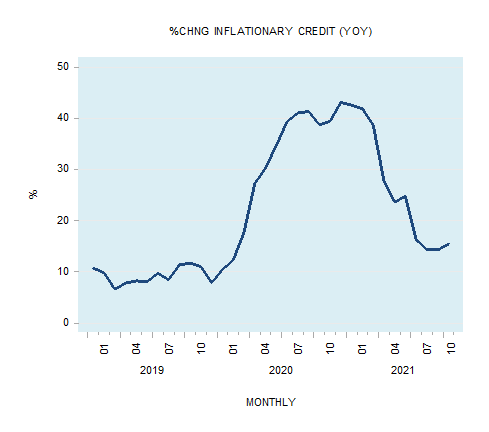 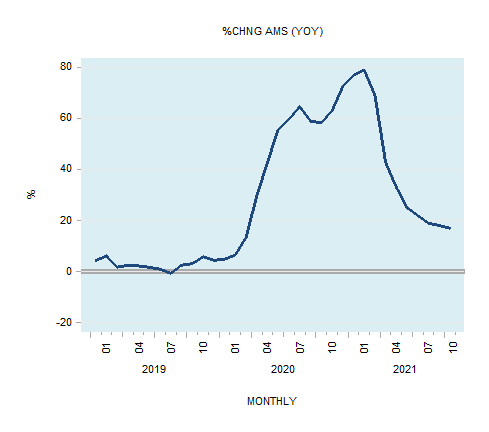 Furthermore, because of loose monetary policy, the low interest environment against the background of a growing risk raises the likelihood that banks’ are likely to reduce further the expansion of inflationary lending. All this puts a downward pressure on the stock of money. Note that our monetary measure, which closed at $9.8 trillion in June this year, fell to $9.6 trillion by October. Hence, the central bank may find that despite its attempt to inflate the economy the money supply momentum could follow a declining path. We hold that a decline in the money supply momentum is going to undermine various activities that emerged on the back of the Fed’s monetary pumping thereby posing a threat to economic activity.

We suggest that the Fed is going to attempt to offset this decline in economic activity by aggressive direct monetary pumping. For example, the central bank could monetize the government budget deficit or it could mail checks to every citizen in the US - all this however, is going to further undermine savings and devastate the economy.

This means that any measures that the government is going to undertake must be at the expense of activities that are generating wealth. Needless to say that this is likely to weaken the ability of the economy to generate goods and services.

The massive monetary pumping by the Fed has likely undermined the pool of savings. Consequently, this is likely to weaken the economic growth rate ahead. By most commentators, the increase in money supply is going to lift the demand for goods and services. As a result, it is held, this is going to set in motion an increase in the production of these goods and services. We suggest that if the pool of savings is in trouble it is not be possible to lift production.